U.S. Representative Abigail Spanberger is proud to represent the people of Virginia’s Seventh Congressional District in the U.S. House.

Abigail’s career has been defined by public service. She first swore an oath to the U.S. Constitution as a federal agent with the U.S. Postal Inspection Service. In this role, she investigated money laundering and narcotics cases — including at the southern border. Then, as a Central Intelligence Agency (CIA) case officer, she worked at home and abroad to collect intelligence, keep our country safe from terrorism, and inform policymakers in their national security decisions. Following her time at CIA, Abigail joined the private sector and helped American colleges and universities diversify their student bodies, expand opportunities for Americans entering the workforce, and increase graduation rates. 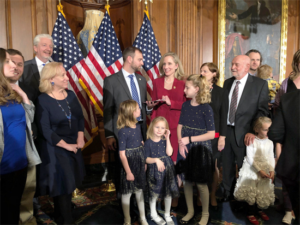 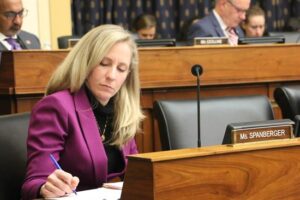 The nonpartisan Lugar Center ranked Abigail as the most bipartisan Member of Virginia’s congressional delegation, and she has received several national awards for her commitment to getting results for Virginia, focusing on constituent services, and working across the aisle.

Abigail grew up in Henrico County, Virginia and is a proud graduate of Henrico County Public Schools. She earned her B.A. at the University of Virginia and her MBA through a dual degree program between Purdue University’s Krannert School and the GISMA Business School in Hanover, Germany. She speaks English, Spanish, German, and French.

Abigail and her husband Adam have three school-aged children.